Our single day conference venue for 2014 was St Wilfrid’s Hall at the Oratory, Brompton Road, London.

Numbers were limited as the room was more compact than the usual university style venue, however, everyone agreed that the comfortable room with period bookcases, wooden paneling and soft lighting, was perfect for such an event.

After welcome tea, coffee and biscuits in St Joseph’s Hall we all moved to St Wilfrid’s Hall and Peter Allingham, MD of Ancient World Tours, greeted our delegates. After a quick run through of the usual precautions for fire drill our full house settled in for a day of exciting talks.

Our opening speaker was Laurent Bavay, who holds the Chair of Egyptian Archaeology at the Free University of Brussels. Titled ‘The Lost Tomb of Amenhotep & the Pyramid of a Vizier’, Laurent told us how for 15 years, the Belgian mission in the Theban necropolis has been exploring tombs belonging to some of the great dignitaries of the New Kingdom. Co-Director Laurent reported on the 2009 excavation that lead to the ‘lost tomb’ of Amenhotep, a deputy of the overseer of seal-bearers under Thutmose III..

As work progressed, another monument came to light, the remains of a pyramid which once dominated the West Bank landscape. Excavations in 2012 and 2013 confirmed that this was indeed a pyramid. The complete pyramid, had a base of 12 x 12 meters and a height of 17 metres, but was largely destroyed in the 7th and 8th Century AD when the tomb was converted to a Coptic hermitage. A portion of capstone was found and along with hieroglyphic texts on the bricks used in the building we now know that Khay was the owner of the monument. Vizier Khay held his position under the reign of Rameses II. Remnants of the steep sided walls are coated with white plaster showing that this was a most imposing monument overlooking the Ramesseum. With well-presented maps of the site Laurent explained the location and presented a fascinating insight in to a working excavation.

Our second talk was on an excavation, or rather, a series of excavations much closer to home.  Jay Carver, Project Archaeologist for Crossrail, gave a talk on ‘Portals to the Past: Recent finds on the Crossrail archaeology programme’. Jay explained how the construction of Crossrail through the heart of London is resulting in one of the most extensive archaeological programmes ever undertaken in the UK.

Beginning with the find of an extremely rare piece of UK amber, estimated to be 55 million years old, we learnt how the landscape had changed over the millennia. Jumping from prehistoric animal bones, Roman remains, human remains from the infamous ‘Bedlam’ psychiatric hospital and remnants of Britain’s industrial past we had a rapid lesson on the history of our capital city. One fact that surprised us all was how skeletal remains in many ‘Plague Pits’ were arranged in neat organised rows rather than the general idea of being thrown in together. The project spans 118 kilometres with more than 30 construction sites and has had more than 100 archaeologists involved in the work so far. London was once criss-crossed with rivers and the new route bisects a number of these ancient waterways. Our industrial history is well documented and archaeological investigations at Limmo Peninsula have uncovered the remains of the Thames Ironworks and Shipbuilding Company and in west London, many buried features of Brunel’s work have been discovered. An exciting talk that inspired many attendees to look out for future local exhibitions on the project.﻿

Lunchtime followed and a wonderful buffet was presented in St Joseph’s Hall. Catering for this year’s event was handled by Volunteers from the Order of Malta. They did a grand job and there was certainly plenty to eat and drink. A wide range of sandwiches, sausages, cheese and fruit with plenty of tea, coffee and soft drinks. A donation from the sale of tickets will be made to the charity.

Chris Naunton, Director of the Egypt Exploration Society had the unenviable task of taking the first slot after lunch. However, there was no problem at all as his talk, leading us through the lesser known Oases areas of Egypt, was beautifully presented. Based on a tour taken with passengers from the EES earlier this year, He gave a daily account of the delights waiting if you venture away from the Nile Valley.

Beginning with a look at South Sakkara and the Mastabat Faroun and Abu Sir Pyramids, we moved on to the Faiyum looking at the ancient city of Karanis and the pyramids of Lahun and Hawara. Then, Wadi el Hitan and the Valley of the Whales to look at fossils dating back 40 million years.

Chris talked us through the shots showing stunning landscapes from the Black Desert, the White Desert and the Oases.  The group were even filmed and interviewed by an Egyptian film crew in Ain Labekha, a remote settlement close to Kharga.

On arrival in Luxor we heard how places evolve over the years. Just looking at Luxor Temple for instance shows us how successive generations of people have used the Temple for their own place of worship. Travel in the Oases shows how archaeology fits in to the modern environment.

Chris ended by advising us that there was a report on the entire tour on the EES website. It was plain to see that Chris was thrilled by his recent trip.

Wadi el Jarf is not a well known area so we eagerly awaited the talk from Pierre Tallet of the University of Sorbonne, and Co-Director of the Wadi el-Jarf expedition. Pierre explained that Ayn Sukhna (Left) was a harbour complex used during the Old and Middle Kingdoms to reach the mining zones of turquoise and copper in Sinai and trading with Punt.

﻿Even more exciting is the find of the Papyri of Khufu – the most ancient found in Egypt. Discovered between 2 limestone block the papyri give accounts of food deliveries including a journal of  a working team involved with a big boat building project  for Khufu. The papyri can even give us a date for the end of Khufu’s reign stating year 26-27 of Khufu. These fragile documents give us an insight  to the workings of the Royal Granary providing the workers with bread, fresh figs and wine with columns stating still expected, received and sent, all evidence that nothing really changes.﻿

The site of Wadi el-Jarf some 90 Kms south of Ain Sukhna is only about 50 ks from the western coast of Sinai. Evidence in the form of ceramics found at the  four groups of installations at Wadi el-Jarf point to occupation dating back to the 4th Dynasty. Large galleries found  about 5 from the shore were used for storage and are cut in to the limestone bedrock. The harbour has been confirmed by the discovery of many limestone anchors.

Afternoon tea followed before we took our seats to hear Steve Cross talk about Walking the mountain, hidden secrets of the Valley of the Kings.

First Steve explained that huts are huts (like sheds) not houses that were lived in. Our journey began at Deir el Medina and we left the worker’s village and climbed the Theban Hills. Steve pointed out some ancient history in the form of fossilised sea urchins and clams and scallop shells (Left). He showed how the workers had cut a stone staircase on the mountain path to make their journey easier and showed the water erosion in many places. Guard huts have doorways but other huts have no entrance way so were obviously just for storage of precious items such as tools and working goods.

There are many signs of stone tool manufacture on the hills, some up to 100 thousand years old, and these sites should be protected and not disturbed.

Steve ended his talk by telling us about a particular area in the West Valley of the Kings he is interested in. All the signs point to an unfound tomb: guard huts, an entrance way, graffiti showing that a vizier inspected the area and a wall built to divert water away from the site. So watch this space maybe there will be more news soon. An exciting and very positive way to end a great day of lectures. 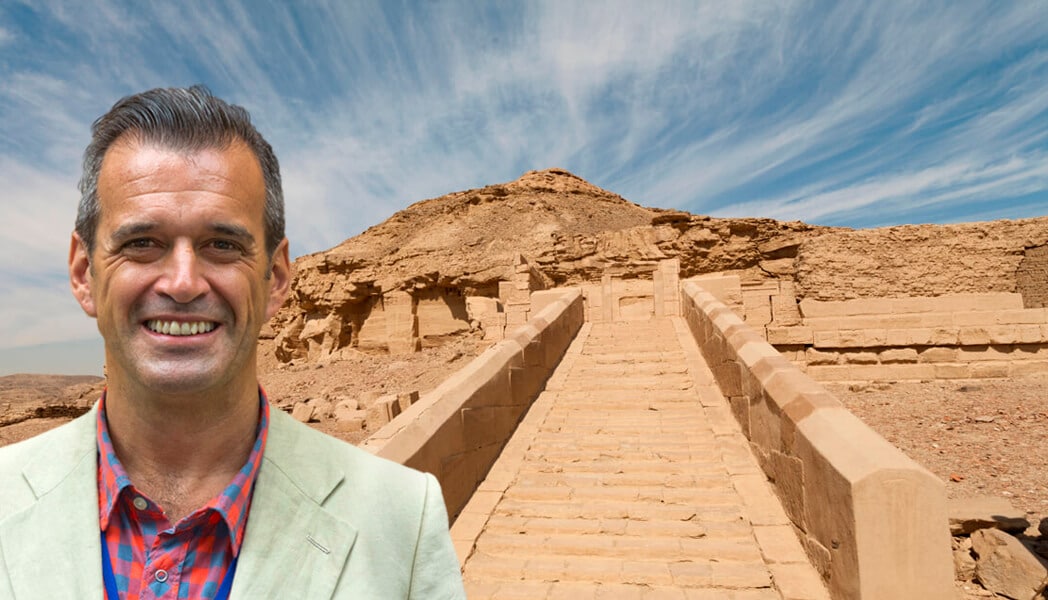 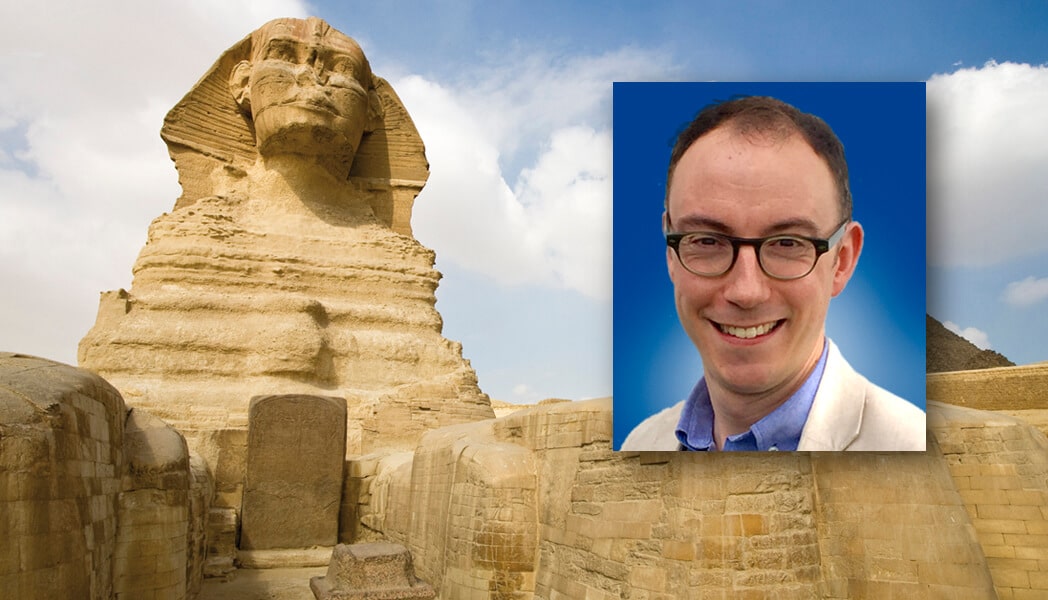 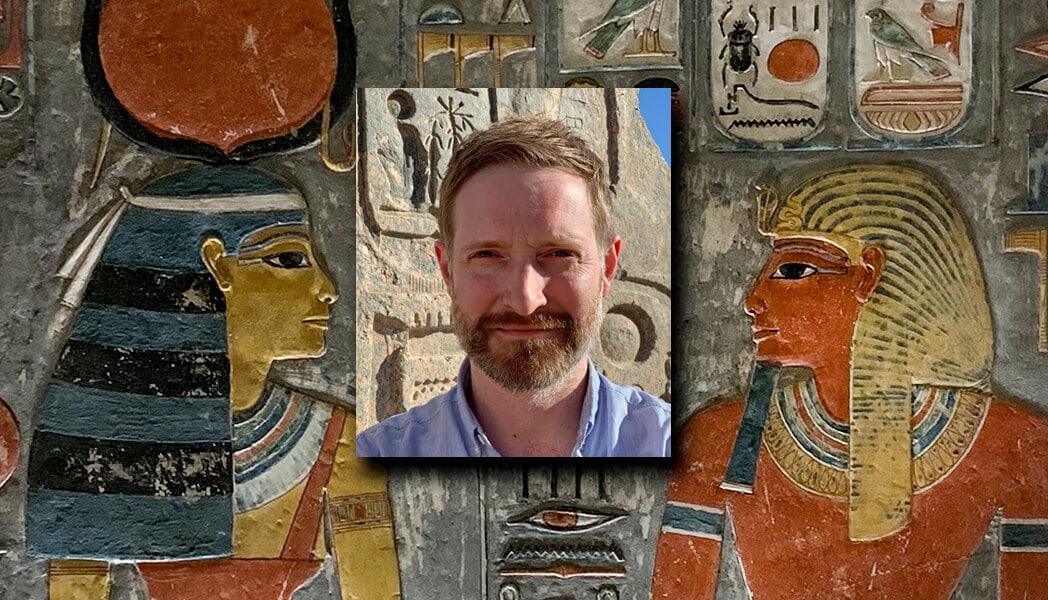 Theban Tombs and the Afterlife